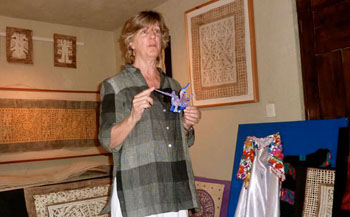 The Folk Art Gallery at Casa de la Cuesta is a collection of artists whose work has direct ties to their indigenous cultural roots. Heidi has worked with many of these artists for more than 15 years. She loves to explain their connections with the culture and weave the stories of their rich backgrounds. The iconography, the clothing and the artisania are all a manner in which different indigenous groups can record and perpetuate their history. The gallery includes works by the Huichol , the Zapotec, the Nahua, the Otomi, and the Mazahua. Learning about the history of this work can give visitors a better understanding of some of the many wonderful layers of the Mexican indigenous culture that still exists today. 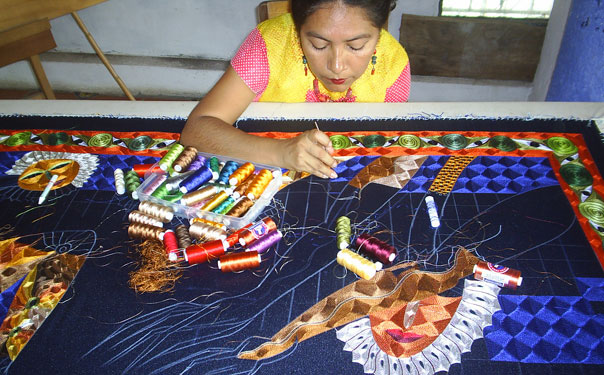 Natividad Armador: Comes from the town of Juchitan in the state of Oaxaca. Natividad, whose native language is Zapoteco, learned the craft of Tehuan silk stitchery as a young girl. After receiving her degree in fine art from the Autonomous University of Bellas Artes in Oaxaca City, she discovered a unique method of combining this traditional stitching technique with modern design. The result is silk embroidered art inspired by nature and native Oaxacan ritual. She has exhibited in several galleries in Oaxaca, Mexico City, Tucson, Arizona, Austin, Texas and Paris, France. Natividad is represented in San Miguel de Allende by Casa de la Cuesta. 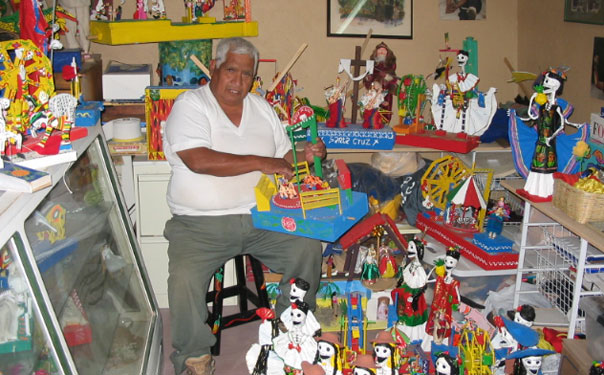 Gumercindo España Oliveres began making toys over forty years ago. His family; wife, children and grandchildren work with Gumercindo, or "Chinda" as his friends call him, to make some of the most colorful, humorous and clever creations imaginable. His ingenuity in creating new toy designs has earned him recognition from the Fomento Cultural Banamex in 1996, and he has been featured in the book, Great Masters of Mexican Folk Art. Gumercindo lives in the village of Santa Cruz de Juventino Rosas, about two hours from San Miguel de Allende. He visits Casa de la Cuesta about once a month to deliver his latest creations. 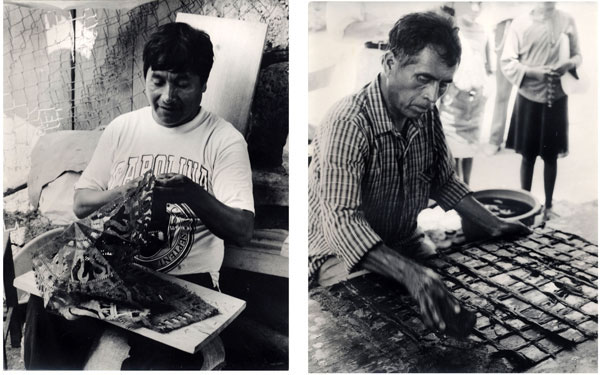 Humberto Trejo Gonzalez comes from the Otomi village of San Pablito, high in the mountains of Puebla where the populace still speaks a dialect of Otomi. He and his family are recognized for their creative designs in papel amate, handmade hammered paper. The paper is made from the bark of the Jonote tree by soaking the bark in a hot bath, using dyes that are natural; flowers, ash, bark, etc. Humberto has taken the power of the paper, used in ceremonies as petitions for health and harvest, and has created contemporary designs. Humberto has paper in the Smithsonian Museum, The British Museum and The Museum of Anthropology in Mexico City. 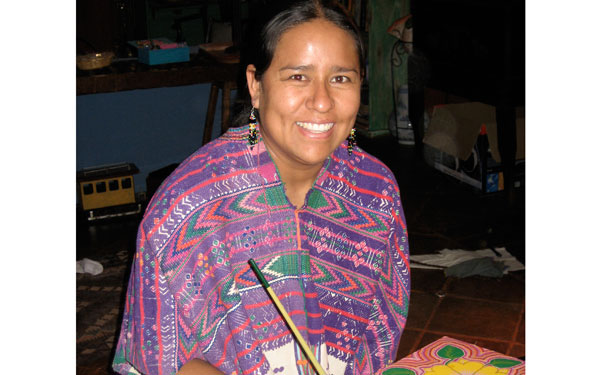 Blanca Estela Gomez Santiago was born in the town of San Antonio Arrazola Xoxocotlan Oaxaca. When she was 11 years old she apprenticed with a local woman, caring for her children and learning to paint the dots on the Allebrijes (imaginary wooden animals). Blanca has evolved this into an art form that is all her own. Blanca makes paintings and paints furniture using the tradition of the dots that she learned as a child. She has a marvelous color and design sense which is exhibited in her work.